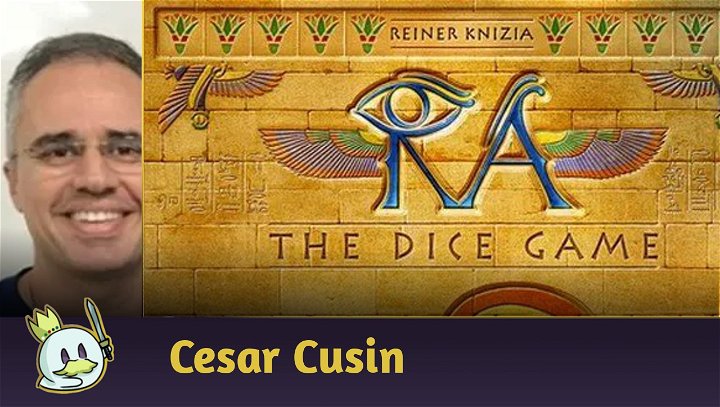 Seek to expand your power and fame by influencing pharaohs, building monuments, taking care of agriculture on the banks of the Nile River and advance your civilization.

Ra was one of the main deities of Egyptian religion during the Fifth Dynasty, which was marked by a turbulent period with various concerns of a religious, political and economic nature. Ra was represented in several ways. The most common form was a man with the head of a hawk, a sun disk on top, and a serpent coiled around the disk. His main cult center was the city of Heliopolis, where he was identified with the local sun god.

Ra: The Dice Game, is a game for 2 to 4 players, aged 10+, from acclaimed designer Reiner Knizia, author of several other award-winning and no less cool games. The person responsible for the illustration is Franz Vohwinkel, also responsible for other very interesting games, it's worth researching these guys. Ra: The Dice Game is from 2009, and it's the little brother, I mean, the dice version of the Board Game Ra, 1999, by the same author. The game covers mechanics of rolling dice, collecting components, and "push your luck". It's much faster than the Board Game version and no less fun.

Well, obviously the Sun god Ra token is present in the game, it is at the beginning of the Sun track and as a god, he controls the duration of the game over three eons. The speed of the ages depends on the luck of the dice, as in the player's turn, they will roll the 5 thematic dice, and each Sun symbol that appears on the dice goes immediately in front of the Ra token signaling that they will walk on the trail, that is, it is the era ending. The “test your luck” factor occurs in the 2 possible re-rolls of the dice to obtain the desired results, namely: advance on the Pharaoh's trail, on the Nile River, increase your Civilization or build Monuments. The faces of the dice represent their purposes well and are also represented on the board to make it easier, but you may have noticed in the previous image a face with the famous “Ankh” (Cross). It is the wildcard die, but with one caveat: it is necessary to have at least one specific face so that the Ankh can act as a wildcard for that face. Finally, having chosen the dice after the 3 rolls, the player allocates the cubes of its color in the places where the faces of the dice came out and evolves in the respective chosen tracks. Still about the Ankh, if you have 2 of them, you can choose instead of using them as a wildcard, use them to score 2 points. But it's not just a cakewalk. If 4 or more Sun results are rolled, disaster happens, obviously not with the current player, but with all the other players. Among the disasters are: retreating on the Pharaoh's trail, on the Nile River trail, losing Civilization and having Monuments destroyed, after all, the Egypt's plagues aren't forgiving When the Ra token reaches the end of the track, an age is scored. For this, the game has a summary card that greatly helps understand the scoring. In detail, in the first 2 eras, only the Pharaoh, Nile and Civilization trails are scored. The Monuments are still being built, but they'll score later on.

I love rolling dice, even more knowing that anything can happen—everything from advancing on the respective lanes, making an era end and not being well positioned on the lanes, to causing disaster. It's really exciting! Each trail has its peculiarity, some only score the best placed with more points and the worst places with fewer points, that is, it's no use to be average, the thing is to dispute each trail. This is the case of the Pharaoh's trail. Another trail scores as long as it has more than one cube is the Nile River, but it's not easy: you need 3 Nile faces on the dice roll during your turn, which requires some luck. In Civilization, it always takes 3 or more dice with the Civilization face to place cubes on the location, so it is known that populating a location isn't easy as well. And if you consider thriving on other trails and ignoring Civilization, don't even think about it because if you don't have Civilization cubes when you score, you lose 5 points, if you have 1 cube, you don't score, and you only score with 2 more cubes, so you need to populate the place. The Monuments are a different case, they take 3 ages to finish — that is, if no disaster ends them —, but it's not simple either, after all we're talking about Monuments, and they have their peculiarities, some special and straightforward rules, but that make the game even better.

The end of the game occurs when the Ra token reaches the end of its trail for the 3rd time, symbolizing the end of the 3rd era, now in addition to scoring the normal trails, the Monuments are scored, that is, the winner's result will only come out even at the end of the 3rd and final age. The player with the most points wins, there is no tie-breaking criterion, it means that they evolved in the same proportion.

Here the tips are clear, but not so easy to hit before an era scores. On the Pharaoh's trail, always be ahead to earn more points or be present and don't advance, thus earning few points. Staying in the middle won't get you any points. You need to pick a poison and go for it. On the Nile River trail, the best option is to have 2 tokens on site. Otherwise, you don't score. Here, two different strategies can be adopted. With 2 tokens, you score, but after that, you remove the tokens from the trail. For those who have only 1 token, they do not score, but keep the token for the next round. So note that it's something that can wait, if you plan. Choose your strategy. In Civilization, this cannot be ignored anyway, as it is one that removes points, you have to have at least 3 tokens to score. Ignoring this track takes away 5 points, having 1 or 2 tokens doesn't make you lose or gain any points. It's always good to be on the lookout here!

In Monuments, I recommend investing calmly, but constantly. It may not even be your focus in the 1st era, but from the 2nd onwards you can start building more, as these points make a difference at the end of the game, which makes everything better. When you have disasters (which remove cubes from opponents), always seek to remove civilization cubes in the 1st and 2nd era, this will make them retreat in points, in the 3rd I recommend removing cubes from Monuments, after all, they really make a difference in the end. You don't have to be nice!

Ra: The Dice Game is a playful history lesson. Telling the history of Egypt through the ages is wonderful, telling about the Sun god, the importance of the Pharaohs, the Nile River, Civilizations and Monuments, all of this is a separate show and can be shown using the internet. Children will have more fun playing the game afterwards. Mathematically speaking, the use of dice can be used to work probabilities, resource management can also be worked on when choosing which type of dice to keep and which to re-roll. Which path to invest in teaches them short, medium and long-term projection, which is good! The notion of time in this game is paramount. The spatial notion is also present, as the Monuments score according to their position, it is easy since they are simple rules, but also require caution and strategy. Anyway, this game can be very well enjoyed, for sure! I recommend Ra: The Dice Game, to your collection!!! 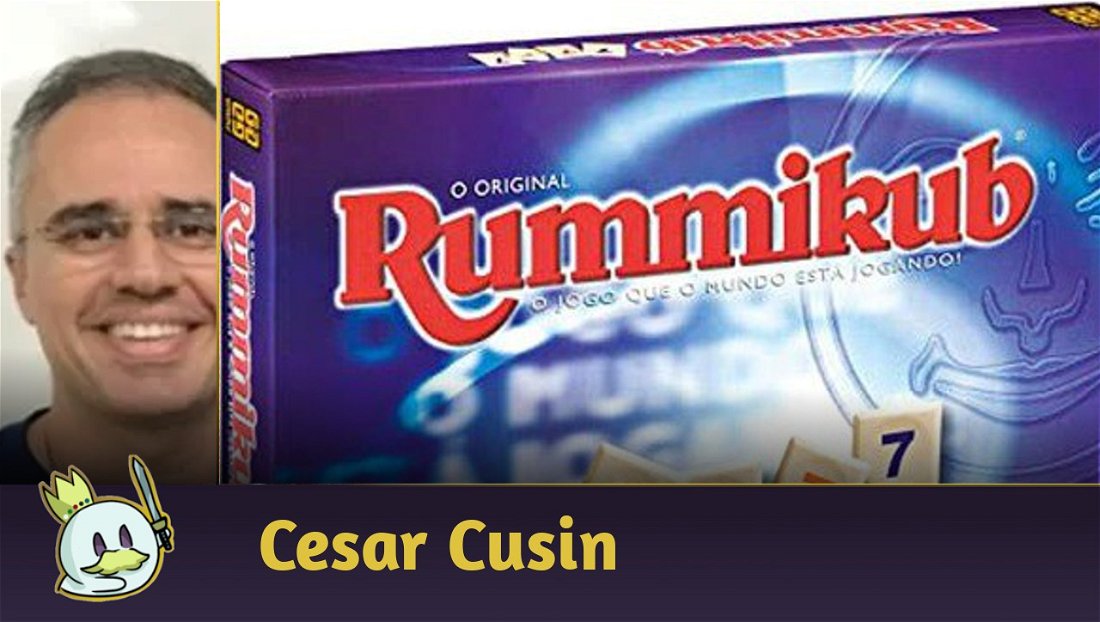 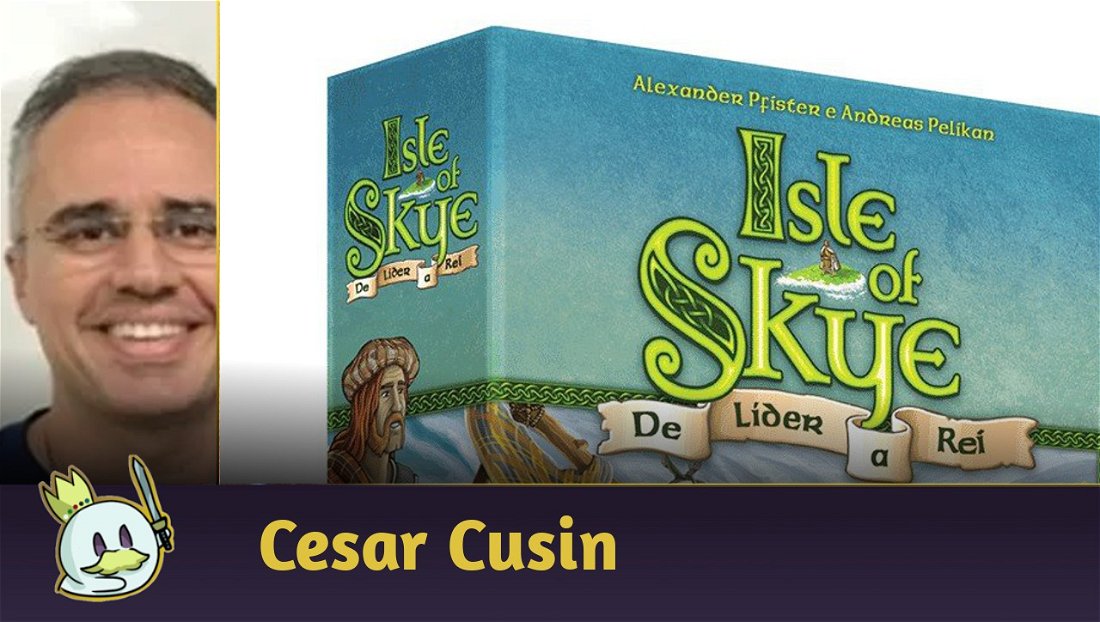